The YES-VertaCure automated, high temperature cure series of ovens is designed for today’s most demanding MEMS and semiconductor process applications. Whether it’s for proper curing of multiple layers of polyimide in an RDL (Bond Pad Re-routing) application or annealing copper in an advanced semiconductor device, the YES-VertaCure helps achieve total environmental control to increase yields and extend device performance.

The system incorporates the laminar flow technology of the YES-450PB series. It accommodates 200 and 300mm wafers with one or two load ports and a wafer handling robot inside an integrated Class 1 minienvironment. Up to 50 wafers are loaded into a stainless steel cassette-type rack on the oven chamber door and, when loading is complete, lifted up into the vacuum chamber.

VertaCure Series is designed to achieve tight control over your process atmosphere:

The VertaCure Series is available with:

Which supports the following MEMS applications:

YES-VertaCure Process
The process begins with vacuum cycle purges to remove oxygen and water vapor followed by a continuous horizontal laminar flow of up to four process gases. The laminar flow of gas can be maintained during a recipe-driven temperature profile. Operating temperatures are 150°C to 450°C; pressure range is 50-500 Torr.

YES-VertaVac (High Vacuum Process)
The process begins with vacuum cycle purges to remove oxygen and water vapor followed by a continuous horizontal laminar flow of up to four process gasses. The laminar flow of gas can be maintained during a recipe-driven temperature profile. Operating temperatures are 150°C to 450°C; laminar flow pressure range is 0.50-500 Torr. The tool is also capable of evacuation down to 5E-5 Torr using a vacuum turbo pump.

YES-VertaCoat (Silane Vapor Deposition Process)
Silane vapor deposition is a process that assists in the de position of a thin film of various chemistries in order to achieve precise surface modification. Vapor deposition is the preferred method for coating surfaces with silanes.

As technology shrinks, there is a growing need for precise control over nanoscale surface areas. The YES-VertaCoat gives you total control over your process environment. The tool also is designed as a flexible system to accom modate a variety of silanes and processes.

Specifically, the silane vapor deposition process assists with MEMS coating to reduce damaging stiction and photoresist adhesion for semiconductor wafers. The entire YES-VertaCure series is designed to give you uniform, repeatable results with an added bonus of cost savings! 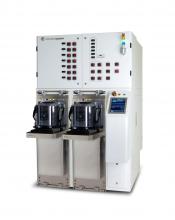